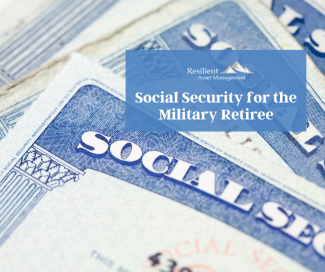 Social Security for the Military Retiree

Social Security is indeed one of the "pillars" of nearly every American's retirement. This government program paid out nearly $955 billion dollars of benefits in 2017. Depending upon your earnings during your working years and your income in retirement, your net after tax social security income can vary widely. For military retirees, who are among the last select group of Americans with a defined benefit pension, managing Social Security is an ever-important task.

The history of Social Security in the United States is indeed fascinating. Signed into law by President Franklin D. Roosevelt in August, 1935, the Social Security Program was part of the "New Deal". Fearing both unemployment and aged Americans living in poverty, Social Security, among other things, endeavored to fund older Americans' retirement with funds paid by younger workers via a payroll tax. In Social Security's beginnings, older workers benefited mightily.

Perhaps the most famous Social Security recipient is Ida May Fuller of Ludlow, Vermont. The accumulated taxes on her earnings for the three years she was employed under the Social Security Program equalled $24.75. When she began receiving benefits, her first check was for $22.54. More simply put, by her second month of benefits, she had exceeded the amount she had paid in payroll taxes. Feeling financially invigorated perhaps, Ms. Fuller lived to be over 100 and collected an accumulated amount of $22,888.92 in Social Security Benefits. You can read more about her story here.

Here are a few important facts for military folks to keep in mind about Social Security:

1)  The Full Retirement Age (FRA) for nearly every current military member on Active Duty is 67.

Several years ago, recognizing some of the financial burdens of the program, the U.S. Government raised the full retirement age to 67 for all Americans born in 1960 and later. There may be an exception or two amongst current Active Duty military, though there are not many.

When you claim before your FRA, you are "claiming early" and your benefit is reduced according to how many months before your FRA you claimed. You can see the chart here. Claiming at the earliest possible date results in a 30% reduction in your monthly payment.

For those willing to wait beyond FRA, a bonus awaits. For each month after FRA, your benefit is increased by 2/3 of 1%, or 8% per year. There are no additional benefits to garner beyond 70, so claiming on your 70th birthday is as well as you are going to do with Social Security.

The calculation for the taxability of Social Security benefits is somewhat complicated. The key numbers to note are as follows:

These numbers are not indexed for inflation - unlike your pension, which is indexed - so it is very, very likely that nearly every military retiree will confront Social Security benefits being between 50-85% taxable.

Generally speaking, the average healthy American is better off delaying Social Security benefits to age 70. Assuming a life expectancy of about 80, the total payouts of an FRA claiming or an Age 70 claiming strategy are about the same. Beyond age 80, the Age 70 Strategy wins big time. For a more complete illustration, read this.

For those considering claiming at the earliest age - 62, please don't. This strategy typically yields the lowest overall payout as you are severely penalized when claiming early. The obvious caveat here is health-related. If you are ill, obviously claiming at the earliest possible age is advised. If your reasons are financial, address that now and start saving or consider working into your later 60s...the Social Security benefits are very real.

Here are some other considerations: 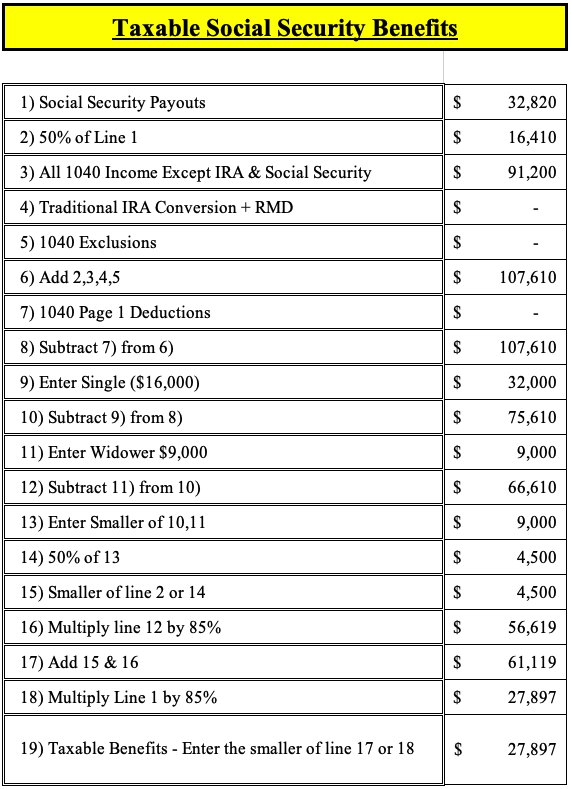 As you can see, fully 85% of the social security benefit - $27,897 - is taxable. This amount is added to the military pension payments and other income sources on the Income Tax Return. More on this in a moment.

2)  Other Sources of Income

Most Military Members are familiar with the Thrift Savings Plan (TSP). I have written about it here, here, and here.

Some Military Members (not all) elect to make tax-deferred contributions to their accounts, and thus receive a current year income tax deduction.  Financial Savvy Soldiers, Sailors, Airmen, and Marines stay invested throughout their careers and typically wind up with an account balance at military retirement of between $100,000-$300,000. This is usually in their early 40s.

Assuming additional employment and contributions to the tax-deferred account, which may be a 401(k) by now, it is not unreasonable to expect a Tax-Deferred Account Balance of $500,000-$1,000,000 at age 70.

At age 70 1/2, the rent is finally due. The U.S. Government kept up its end of the bargain until age 70 1/2 by not taxing your retirement funds. Now, you have to do your part and start recognizing the income in the way of Required Minimum Distributions (RMDs).

To calculate the amount of the RMD for the current year, you take the prior year's December 31 balance and divide by an IRS-mandated divisor. Mercifully, the divisors start big, resulting in a smaller RMD and decrease with age. Here is the chart:

The chart continues obviously, I am condensing it to the first 15 years to illustrate the point. You can see the entire table here.

Example of an RMD Calculation:

This amount is added to the Income Tax Return as earned income...there is no allowance for capital gains, basis, or any other investment-based consideration. Please note, this is the MINIMUM distribution at Age 70, you are free to withdraw as much as you want starting at age 59.

3)  Putting it all together

Before continuing, it is important to know the income tax brackets, which are as follows for a single individual (source) 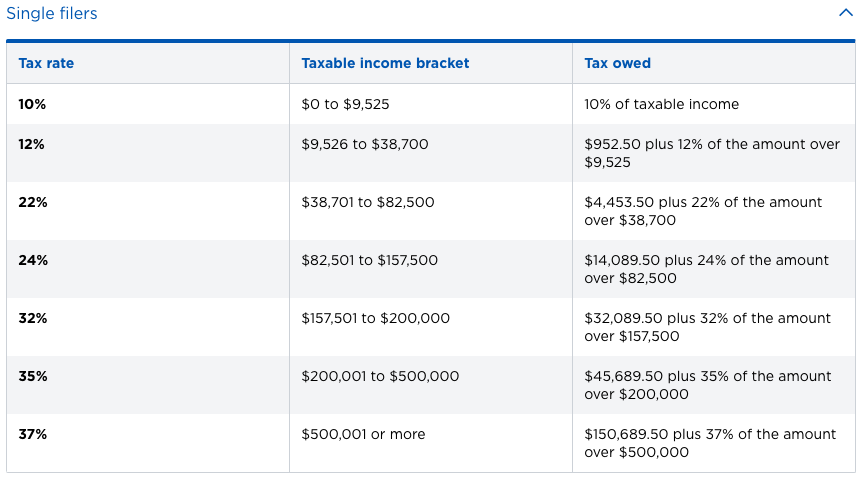 Continuing the example, here is what the prospective 70 1/2-Year Old Senior Military Officer can expect on her 2019 Income Tax Return (assume filing single):

The takeaway here is that the combination of Social Security and the Required Minimum Distribution takes the Military Retiree from the 22% Tax Bracket into the 24% Bracket. Clearly, there is potential to reduce taxable income - charitable giving and home ownership being the primary examples. However, for most people, this example is likely something close to reality. Therefore, some Financial Planning may be in order.

Considerations for the Pre-70 Military Retiree

Roth Accounts, either IRA, 401(k), or TSP, are the mother's milk of retirement. This may sound pithy, however, it bears saying...0% is a very low tax rate. To get to 0%, you have to endure some present-year pain income tax wise.  However, for the rest of your life, you will not pay income tax under the present tax code. Thus, the RMD illustrated above would be ZERO if all retirement funds were in a Roth Account.

For those who doubt this strategy, I urge you to compare current Income Tax Rates to those of the past. In 1980, for example, President Reagan's first year in office, the highest marginal tax rate was 70%...the highest historical rate was 90%! Today, the max is 37%.

I freely admit there is much debate to be had about taxation, income equality, and the like. At the individual Active Duty Military Member level, however, it is probably wise to pay your Income Taxes now satisfied this is as good as it's going to get tax-wise. True, income taxes could go lower, though that reality doesn't seem probable right now.

2)  Consider Roth Conversions prior to Age 70

For Resilient Asset Management Clients who are in receipt of a Military Pension, the default consideration is to convert Tax-Deferred funds to Roth. To do so, the Military Retiree must recognize income in the year of conversion.  However, Military Retirees are typically working in their post-military life, so it is not an insurmountable burden. VA Disability benefits only bolster the advisability of this strategy as tax-free funds are available to pay conversion taxes.

Recognizing income each year may alter your Income Tax bracket, so it may be worth consulting a Financial Professional to develop a cogent plan to execute the Traditional to Roth Conversion. The benefits of a properly executed plan are indeed real.

Obviously, each individual has unique circumstances, so Roth Conversions may not be the right answer for everyone. For everyone, they do deserve consideration.

For those who are charitably inclined, you are permitted to make charitable contributions in lieu of an RMD at Age 70. This is a bit outside the box if you are a self-preparer, so you may want to consult an Income Tax Professional if you want to pursue this strategy, which can have real Income Tax Benefits as well.

Social Security is a seemingly easy-to-understand program. However, when you claim can have cascading effects on other aspects of your finances. Thus, it is wise to consult a financial professional who can alert you to financial blindspots and assist you in your claiming strategy. Doing so could save you a lot of income tax heartache(s).

Comments, criticism, and suggestions are always welcome. If you would like to provide any, please contact me here.