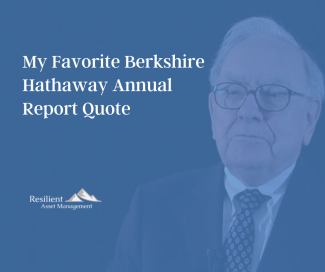 Warren Buffett is indisputably one of the greatest investors of all-time, perhaps the greatest...GOAT  (Greatest of All Time) is a difficult distinction to unequivocally award. However, by any objective standard, he is indeed the cream of the crop. To say he has influenced my personal investing philosophy and principles would be a supreme understatement.

Every year for Christmas, my dad would give each of his three kids (I am the youngest, and paradoxically - as I assess it, the wisest - a book.  In 1995, he selected The Warren Buffett Way by Robert Hagstrom.  At the time, I had no clue who this unassuming man wearing thick glasses was.  Moreover, after reading the book, I saw no merit in owning both a Candy Store and a Furniture Store.  To be fair, I was attending the University of Minnesota at the time, so the cold weather and Gaussian Eliminations (in my Numerical Analysis class) distracted me somewhat.  Thus, the book sat on my shelf thereafter collecting dust.

In 2003, while on vacation and a bit bored, I happened into a bookstore and meandered to the "Business" Section to see what they had.  After perusing the lot, I zoned in on Buffett:  The Making of an American Capitalist by Roger Lowenstein.  Literally, that book lifted the scales from my eyes about both Mr. Buffett and his unique approaches and philosophies regarding business and investing.  Moreover, I learned the Candy Store I so flippantly dismissed was, in fact, the See's Candies most of us know and love.  Additionally, the Furniture Store I mentioned above was actually the Nebraska Furniture Mart - a true retailing rock star.  Suffice it to say, I was inoculated.

After downing Lowenstein's book, I naturally sought more material about Mr. Buffett.  Unable to find any similar literature at the time - Mr. Buffett wasn't quite the household name he is now - I pivoted to the Berkshire Hathaway Annual Reports.  I was a bit behind in 2003 as Mr. Buffett was already about 38 years into his chairmanship of the company.  Fortunately, while not a speed reader, I can get through more than one Annual Report per year, so I was able to make-up for lost time in no time.

Going through the reports sequentially in short order provided both play-by-play and color commentary on the evolution of Berkshire Hathaway from a very small textile operation into the multi-billion dollar conglomerate it is today.  Realizing this greatness, I started to gather excerpts from the reports into my own repository of "Investing Wisdom".  My trove has grown to many sections; however, Section #1 is "Berkshire Hathaway Annual Reports".  What started as one page has grown to over 100 pages (in MS Word - 12 font) of wisdom from the Oracle himself.  If you don't believe me, contact me here and I will be happy to screen share with you.  Spoiler:  my "Investing Wisdom" has grown to about 500 pages, so set aside some time.

Anyone - and I mean anyone - can garner significant wisdom from the Berkshire Annual Reports...try a few here.  For those in the financial profession, obviously, there is perhaps more to be had.  Today, I thought I would share my absolute favorite quote.

Berkshire's Annual Reports (meaning Mr. Buffett) are oft-quoted.  You can read some of the more popular excerpts here. Obviously, there is much to learn from these - as I said before, his words have essentially shaped my entire investment philosophy. As for my personal favorite, to my knowledge, I have never seen it quoted in articles like the one linked above.

My favorite comes from the 2010 Annual Report.  To summarize the environment of the time (I'm Simplifying):  We (the United States) had just stared down near economic oblivion in 2008-2009, unemployment was still high, interest rates were extremely low, and pretty much, confidence was shaken despite the "green shoots" that had barely sprung up.  In that year, Berkshire - always active when chaos rules the day - acquired Burlington Northern (BNSF)...its biggest corporate activity of the year.  There, of course, were other corporate movements.

Towards the end of the letter, Mr. Buffett provided a copy of a note written by his father advising to keep a "reserve" fund, a concept similarly described here. Mr. Buffett, applying this logic to Berkshire, described how at the corporate level Berkshire keeps what is essentially an "Emergency Fund". Then he went on to say the following:

Obviously, this is not something you can quote at a cocktail party.  However, there is much wisdom in these words...here are some thoughts:

Individuals (and Families) must have an Emergency Fund

I have written extensively about this topic here, here, and here. I cannot emphasize enough how important having a reserve fund is. Simply put, the world is more affordable when you have Emergency Funds in place. For those relying on Credit Cards or other short-term financing in a pinch, interest rates will extract a heavy toll using that thinking. Moreover, the credit upon which you are relying may not be there when you need it the most.

Everyone - and I mean everyone - who is not retired should seek to ultimately spend less than they make. While there may be a year or a period of years where outflows can exceed the inflows, in aggregate, to grow net worth, you have to allocate capital to savings...there is no fairy dust or magic wand to extirpate this reality. True, inheritances and the lottery can distort this philosophy; however, these outliers are not most people.  Keep it simple, commit to a savings and investment plan - your employer matching funds and the friendly U.S. Government will help you along the way.  By doing so, you are planting the seeds of future prosperity.

Building your Net Worth Takes Time

Like most worthwhile endeavors, you will typically not see immediate results when growing your net worth...there is noting particularly sexy about $100 being added to your 401(k).  Realistically, it can potentially take a professional lifetime (career) to achieve a state goal. Take Mr. Buffett for example:  he achieved his first billion dollars of net worth in his early 50s.  Today, in his late 80s, his net worth is about $83 billion...indeed, Einstein's realization about compound interest will never be debunked.

Organize Your Affairs so You Are Never Wiped Out Financially

Being a financial professional and business owner, I hear many pitches about investing "opportunities". Even before becoming a CFP®, I recommended having a skeptical ear about such pitches.  Now that I am a CFP®, my only revision to that statement is to have a very skeptical ear.  Thus, before pondering committing funds to BitCoin, Cannabis Stocks, Non-Traded REITs, Private Placement Debt, the next Amazon.com, or "Hot Concept" Restaurant, please do the following:

Then, so long as your "new" idea doesn't involve undue leverage (i.e. Borrowed Money), dive into your opportunity with an amount of equity capital that you are both:

If those two criterion are not met, pick a random Berkshire Hathaway Annual Report and read it instead...you'll be glad you did.