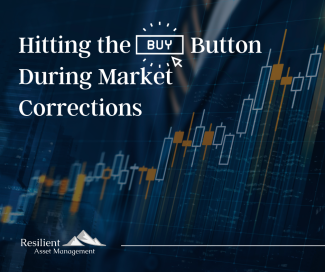 Hitting the Buy Button During a Market Correction

In advance, it is very easy to say Market corrections won't bother you. In the heat of the moment, it's a different story for most. Despite the hysteria, it is important to know that lower market prices are the seeds of long-term portfolio growth.

In JUST the 21st Century, my United States has experienced Stock Market Corrections or Bear Markets 6 times, or about once every three years.  We are experiencing (Dec, 2018) the most recent one with the last one in occurring back in August, 2015.

Looking further back in time, Corrections and Bear Markets are sprinkled throughout history. Today, in December 2018, despite what ANYONE might write, say, or yell, this time is decidedly NOT different. Capitalism is a remarkable phenomena, allowing funds to flow to the most efficient places resulting in maximum benefits for the citizenry (in aggregate). The system is not without its flaws, among which are the market dynamics we are presently experiencing.

Lamenting lower prices and the perceived causal factors is common in this scenario. However, to the long-term BUYER of securities, the lower prices go, the more your ears should perk up. Here are two examples.

My parents started a Burger King franchise in Little Rock, Arkansas back in 1979...I was very young then. What started out as 1 back has grown to 23 today (if you are in Beebe, Arkansas - get there!!!). Over the years, I have gained some insights into the restaurant space and Burger King in particular.  Not everyone goes to Burger King regularly, though please bear with me.

Some time ago, Burger King launched a Limited Time Offering (LTO in restaurant parlance) of 10 Chicken Nuggets for $1.49. Very recently, this price was lowered to $1 for the same number of nuggets. To my knowledge - I have not done in-store research - at neither the Drive-Thru Window nor the Cash Register of any store has a single customer commented about the economy, fiscal policy, trade relations, or any other macro-economic factor in relation to this price decrease.  Rather, leaving aside every other factor except price, customers are quite content with the price reduction. Perhaps even, it brings a smile to their faces as they are literally getting more for their money.

Stock market corrections should be perceived no differently than Burger King Nuggets.  If you wanted to buy your favorite stock at price X, and it is later marked down 20% to .8X, wouldn't the same security would be a better buy?  In the long-term, it seems unlikely that anything that has happened between September 2018 and December 2018 is going to permanently impair a wise equity investment.

I previously wrote about Staying The Course. That article dealt with the Thrift Savings Plan. I thought I would follow it up with an individual stock example.

Back in the 2007-2009 timeframe, the United States was certainly in the most economically uncertain times I've encountered.  At the time, I was stationed in Japan with the US Navy, so when I woke up, it was the end of the previous business day in the United States.  Back then, other things besides coffee perked me up in the morning:

There was no shortage of things to worry about.  However, in addition to reading the newspaper, I have been an avid reader of ValueLine for some time.  Although they provide macroeconomic research, their primary focus is on the ValueLine Universe of Stocks, which encompasses the vast majority of major companies in the United States and a fair few outside our borders.  Individual company research can be an exceptionally good counter-balance to media headlines....a brief example is in order

In 2008, it became apparent that the United States Government was not going to let the banking system fail.  Regardless of one's political views regarding that course of action, as an investor, one had to take a closer look at the relevant players who were to benefit from this policy action.  Target:  Large US banks.

In November 2008, if you were to have read ValueLine's research report on Wells Fargo, you would have seen the following (Source:  ValueLine Wells Fargo Research Report dated November 21, 2008):

Looking only at the numbers, the Risk/Reward proposition for Wells Fargo had changed.  Given the combination of the Government's backing and my assessment that Wells Fargo would pull through the morass of 2009, I decided to hit the buy button.

The scorecard in March, 2009 was not pretty:

Obviously, 38% declines are not easy to stomach. However, I persevered in the hope that brighter days were ahead.  Fast-forwarding one year to March 31, 2010, here was the report card:

Obviously, I chose a winning example - trust me, not all commitments work out this way.  However, I think this is a cogent example of sticking to your guns and not bailing at times of market uncertainty.  Here are some other thoughts to ponder:

I have written previously about what I am today calling the "7 Cornerstones of a Financial Plan", which are as follows:

While anything is possible, I can assure you that if you have all these items shored up, market fluctuations will be much more bearable.  And, most importantly, you will live to fight another day in the market.

You should NEVER invest money in the stock market for which you have an identified short-term need.  Over the long-term, the stock market has among the highest expected returns of any investment - nothing is certain.  However, as I illustrated above, the line upwards can be squiggly - very squiggly...this is called volatility in investment parlance.

For Resilient Asset Management Clients, we work very hard to identify cash needs for specific expenses - college and retirement spending are prime examples.  Whether you employ a Financial Planner or not, you should also be diligent in looking through the chaos and identifying what your near-term cash needs will be.  Then, those funds should be cordoned off for when they are needed.  Indeed, when Retiree Clients fret about market turmoil, I assure them that 1-5 years of living expenses are shielded from the recent turmoil.

If you refer back to the Wells Fargo example above, you will see a bit about the macro-economic climate.  However, there is no mention about trade policy, a government shut down, Federal Reserve Interest Rates, or the unemployment rate.  Typically, market forecasters use these (and other) data points to craft a prediction of where the economy as a whole is headed.  Keep the following quote in mind before letting these forecasts influence you:

While these data points make for great article writing, over the long-term, these factors are trumped big-time - for individual companies - by the durability of their competitive advantage and their earning power.  The best economy couldn't save Toys 'R Us and the worst one won't crush Alphabet.

On a market-wide scale, these same macro factors are averaged out by the robustness of the country's economy, the profit motive pervasive in its publicly traded companies, and by the permissive capitalistic environment in which companies are afforded the opportunity to operate.  Indeed, if we learned anything from the last financial crisis, it is that my United States has cultivated an economy over the past 242 years that is a powerful economic freight train that simply can't be stopped.  Thus, if you're investing your capital in the hopes of better days ahead, there is no country on the face of the planet with better long-term prospects than the United States.

4) Treat Investment Tips at Cocktail Parties as Entertainment Only

Since we are in the middle of party season, it is worth forewarning you about the potential of a fellow attendee trumpeting the next great investment.  Last year, sadly, it was Bitcoin.  Just one year ago, cryptocurrencies were all the rage and the price reflected the popularity - December 26, 2017 Bitcoin Price:  $15,572.  If you were to have listened at the party and went home to buy, by December 15, 2018, your same Bitcoin would be worth $3,217.  And there is no government intervention forthcoming to ignite the price.

So, when you think you may be influenced by such stories at this year's cocktail party, remember the investing maxim, "No investor ever succeeded by buying what was popular when it was popular".  If you hear it at a party, it is likely too late.

Just recently, I received e-mails from two Clients with the following quotes:

Unfortunately, market timing has proven to be nearly impossible for anyone to execute reliably and consistently.  In fact, the risk of being out of the market on specific days can have a dramatically negative impact on your portfolio.

For amateur investors (that's most people) the prudent course is to commit to a systematic savings plan and let the market do the heavy lifting for you.  I know of no other economic activity where you can gain so much by doing so little - laziness is actually rewarded in investing.  And during the journey, never forget about the two biggest contributors to ending account value:

Market turmoil is a common occurrence in Capital Markets.  Knowing that, any market activity should not startle you as anything is possible in the stock market.  For long-term investors, while it is difficult to simply stand idly by, that is the prescription with the most efficacy for investors.  While you are waiting, you can recite one of my favorite Charlie Munger quotes, "The big money is not in the buying and selling, but in the waiting."