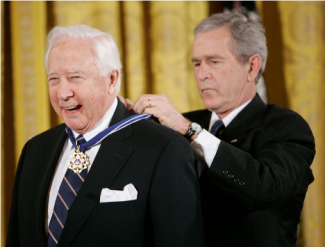 Goodbye to a Great Storyteller

We lost one of America’s great storytellers, David McCullough, recently.  While I never met him personally, I learned a great deal about him while reading many of his books.  A few words to amplify…

I first heard of David McCullough upon the publication of his seminal work about our nation’s 33rd President, Harry Truman, published in 1992.  Initially, this was a book I admired from afar.  At the Naval Academy, where I was in my 2nd year at the time, I never could have rationalized reading an 1,120 page book – looking back, I had enough free time to read several 10,000 page books.  In any case, in 1992, reading Truman became a long-term goal….I mean, really long-term goal.

As any Naval Academy graduate remembers, we all had to endure/enjoy Forrestal Lectures.  Named after James Forrestal – who served as both Secretary of the Navy and the US’s first Secretary of Defense – these lectures are part of the Academy’s mission of professional development.

Invariably, each Forrestal lecture comes at a seemingly inopportune time – exams, inspections, other deadlines plus Lord knows whatever else generally trumps a mandatory lecture, regardless of who is delivering it. And for some Midshipmen, all of the Forrestal lectures were only seen as “Bore us all” events.

I recall – relatively vividly – wondering why this author was chosen to address the Brigade of Midshipman.  After all, other lecturers had included Margaret Thatcher, Dick Cheney, and Colin Powell just to name a few.  Who in the heck did this David McCullough guy think he was?  Well, as it turns out, I quickly learned Mr. McCullough was quite credentialed to address the Brigade.  For me personally, by a wide margin, his Forrestal Lecture had the biggest impact on my life.

Here is a link to an interview he gave around the time of the lecture.

I recall Mr. McCullough started the lecture describing how he made the same jaunt between the Washington D.C. buildings that then Vice President Truman made to return to the White House once President Franklin Roosevelt had passed away…nothing like getting in the shoes of your subject.  He also went into great detail describing President Truman’s decisions to bring World War II to an end by using “The Bomb” and how the Marshall Plan came to be.  There were many other gems as well, though the two that stuck with me are as follows:

Mr. McCullough emphasized how President Truman knew at his core that the test of time is the only one that counts.  I can still hear those words like it was this morning.  That simple statement guides much of my philosophy, both in general and as a professional Financial Planner.

Additionally, he told all of us the following: “All readers are not leaders; but all leaders are readers”.  Until then, I did “some” reading, though I was nowhere close to where I needed to be, either as a leader or as an “educated man”.  I realized that night that I had a ton of page turning to do and I got to work.  This point was more poignantly made later in my life by Charlie Munger’s guidance, “Sit on your ass and read.”

A Lifetime of Reading

What better way to kickstart my reading than with Truman – my first 1,000 page plus book…and it was harder back then, no Kindles or iPads, so lugging around a book was an intentional endeavor.

While the book was wonderful, it was the confidence it gave me to tackle other important books that was the greatest reward.  My second book, Faraday, I would have never, ever read if not for that Forrestal lecture.  Moreover, reading about Michael Faraday would not have influenced my life the way he has had I not read a biography of his life.  Choosing ‘Faraday’ as my son’s middle name was not the result of some esoteric Google search.

And finally, Mr. McCullough’s wisdom to both read a lot and think long-term indirectly led me to the Berkshire Hathaway Annual reports and the voluminous literature associated with that company and its famous Chairman and Vice Chairman.  Not only did the wisdom contained therein further shape my personal philosophies, it also monumentally contributed to the founding of my Financial Planning firm and the tenets upon which we service our Clients.  Undoubtedly, the seed was planted in February, 1994 at that boring Forrestal lecture.

Here is a photo of his book that remains on my bookshelf to this day:

David McCullough would pop-up in my life periodically over the years, usually with the publication of a new book.  One book, The Wright Brothers, I thought was particularly fantastic, though I’m a bit biased given that I’m a pilot.

I also noted when Mr. McCullough was awarded the Presidential Medal of Freedom…his place among that recipient list is well-deserved.

For movie and horse lovers out there, you probably know that David McCullough was the Narrator in the movie…I immediately recognized his voice when I saw the movie myself – what a great story and movie!!!!

Among the many memorable scenes of the movie, my favorite is when we see Seabiscuit for the first time with the following narration from Mr. McCullough:

“The first time he saw Seabiscuit, the colt was walking through the fog at five in the morning. Smith [Tom Smith, Seabiscuit’s trainer] would say later that the horse looked right through him as if to say ‘What the hell are you looking at? Who do you think you are?’ He was a small horse, barely fifteen hands.  He was hurting too.  There was a limp in his walk, a wheezing when he breathed. Smith didn’t pay attention to that. He was looking the horse in the eye.”

Whoever chose David McCullough to narrate knew what the hell they were doing.

While I never met the man, Mr. McCullough had a meaningful impact on my life and I owe him a debt of gratitude.  If you haven’t done so, do yourself a favor and pick-up one of his books.  You never know where it might lead…